Posted by RainMasters Irrigation In blog 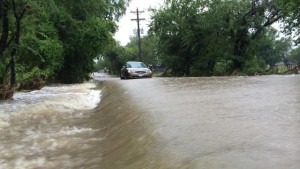 May 2015 will go down as the wettest month in history in North Texas!  Double Eagle has been focusing on drainage solutions as much as irrigation this year.  The incredible amount of rain has nearly brought the end of a historic four-year drought.  Many reservoirs are now at or over capacity. Underground aquifers are slowly being replenished.

Unfortunately the excessive rains have created massive flooding problems and 25 Texans have lost their lives.

As of the end of May, just five percent of Texas, encompassing about 218,000 people in central and northern pockets of the state, was under moderate drought conditions, according to government data.  A water management researcher at Texas A&M University stated “It seems that we have good water resources that will hopefully provide enough water for at least a year,” said Fouad Jaber.